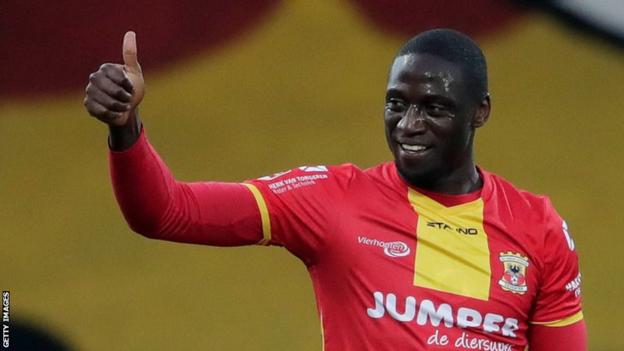 When Go Ahead Eagles won promotion to the Dutch top flight last season, veteran Zambian Jacob Mulenga's reaction was more measured than that of his younger team-mates.

Now set for another season in top-flight football after signing a new one-year deal, the striker is all too aware of what lies ahead.

"Obviously everyone is happy and celebrating, but there's a part of you that's saying 'does everyone understand what's going to happen next?'" the 37-year-old former international told BBC Sport Africa.

"Because now you go from being favourites (in the second division) to the Eredivisie, where if you don't plan properly, you are the whipping boys."

Mulenga's caution is a consequence of 20 years or more in the game, during which he has learned more than he might have liked about the highs and lows that football can bring.

"Let's not kid ourselves - what's going to happen is a lot of hard work," he says of the coming campaign in the top flight. You will have wins, you will have losses, but you really need to know how to stay together.

"Because what happens with a young group, when you lose a couple of games, all of a sudden everyone starts getting on each other's nerves, blaming everyone.

"As an experienced player, you know how to handle that, to go through it to make the season."

That chance to pass on hard-won experience is the reason Mulenga is planning one more playing campaign with Go Ahead Eagles, before he moves on to the next phase of his life.

Variety the spice of life

Mulenga's career has taken him around the world - from his native Zambia, to France, the Netherlands, Turkey, China and back to the Netherlands again.

And he believes that this variety has been central to his success.

"It gives you a huge advantage over everyone else," he said. "Everyone else is trying to get what you have - the experience. [But] you can square up against anyone and understand what is going to happen."

It's one of the reasons why he would encourage young players to broaden their horizons, especially if they aren't getting on to the pitch regularly.

"You have to look for game time because you'll only be happy as a footballer when you're playing," Mulenga says.

"When you're sitting on the bench and you haven't had a conversation with the coach about whether you're going to get game time or not, that's football years going.

That is something Mulenga knows only too well.

When he was in the prime of his playing life - at FC Utrecht in the Netherlands - he suffered two serious injuries in succession.

He was out of the game for many months and doubted, for a time, whether he could continue playing.

In the end, through hard work, good luck, faith and character, he was able to return to action, but he says those months out cost him dearly.

For they coincided with the greatest football moment in Zambia's history, namely their historic Africa Cup of Nations triumph in Gabon in 2012.

Herve Renard's squad dramatically won a first continental crown, in the land where so many of their predecessors had perished in an air crash in 1993.

It was an emotional, cathartic victory but Mulenga was not there - as he was in the Netherlands, recuperating from the second of his major injuries.

Having watched on from Europe as his team-mates secured a place in history, he admits to mixed emotions.

"I didn't feel bitter at all," he says emphatically.

"The fact that you can't be on the field when you're injured, that's what you struggle with. But you're also very happy for the other ones, because you know their success is the country's success.

"The national team doesn't belong to you."

Despite his disappointment at missing out on Gabon, Mulenga - who has more than 40 caps to his name - has played a significant part in Zambia's recent international story.

"Anyone who puts on the Zambian jersey should wear it with pride. It could be for just one minute, but that's a contribution - and that one minute is what's given hope to a thousand kids from the same village as you.

"So I look on it as a victory, that role that I played, to give hope to others."

It is the same attitude which is keeping him on the training field with Go Ahead Eagles, when most other players would long ago have hung up their boots and moved on.

Given the way he talks about passing on experience, and his obvious pleasure in being on the training field, the obvious question is whether Mulenga plans to become a coach.

The answer is blunt and surprising.

"I hate coaching," he said. "I respect all coaches, because I understand how much it takes, how much energy it consumes - there's so much involved."

"For me, [being] up in the offices, managing things. I like that aspect a lot more than coaching. My next objective is to get as many Zambians, as many Africans as possible, to showcase their talent in Europe.

"[Because] no contribution can ever amount to as much as helping someone else make it."