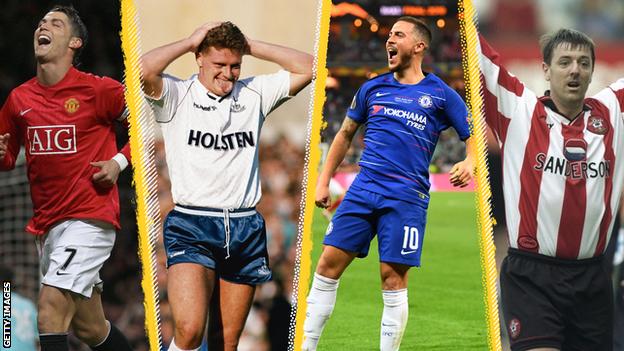 Perhaps simply, as Micah Richards says, it's "all about the sauce".

Gary Lineker, Alan Shearer and Richards have been discussing the Premier League's best ballers in the latest Match of the Day: Top 10 podcast.

To hear how they made their final selections, make sure you listen to the podcast on BBC Sounds and you can rank yours at the bottom of the page too.

Kinkladze joined Manchester City for the 1995-96 season and quickly became a popular figure at Maine Road as the side's star player. But he played only one season in the Premier League as City were relegated to the First Division, prompting Kinkladze to be linked with Liverpool, Barcelona and Inter Milan. He opted to stay in Manchester, but moved to Ajax in 1998 after City were relegated to the Second Division.

Richards: He was good at jinking, had a great touch, the way he used to drop his shoulder - but the rest of this list have played at the top for a bit longer.

French midfielder Payet joined West Ham from Marseille in 2015 and a year later signed a deal that would keep him with the Hammers until the summer of 2021. After refusing to play, in an attempt to force a move back to Marseille, manager Slaven Bilic let him go in January 2017.

Richards: He scored some superb free-kicks. I played against Payet and he used to just get in the little areas and was technically very good.

Shearer: In the end, the West Ham fans didn't like him because he left in a bit of a cloud. He's done well to get on this list, I think Joe Cole should've been on here!

Okocha joined Bolton from Paris St-Germain in 2002 and quickly established himself as a skilful playmaker, known for his confidence and trickery with the ball - leading the Bolton fans to describe him as 'so good they named him twice'. He left Bolton in 2006 to play in Qatar.

Lineker: You wouldn't think he'd be a Big Sam[(Allardyce] type of player really. What was he doing at Bolton?

Shearer: Sam had that reputation for bringing in these players in the latter stages of their careers - I remember when he got Sam to do a dance in a game.

Brazilian midfielder Juninho enjoyed three spells with Middlesbrough, joining initially in 1995-97 and a loan period in 1999-2000, scoring 33 goals in 139 appearances. The Teessiders were relegated in 1997, prompting Juninho to move to Atletico Madrid, but he returned to Middlesbrough for another two-year stint in 2002.

Shearer: Close control, he would run at players and plenty would try to knock him off balance. When you go through this list of players, they all have great balance, but that's the one thing that Juninho was brilliant at - running with the ball, balance and technique. It's just a shame he was doing it with Middlesbrough!

Perhaps better known for his successes since joining Real Madrid in 2012, Croatian midfielder Modric spent four years at Tottenham where, under Harry Redknapp, he became a prolific player. He attempted to force a move to London rivals Chelsea in 2011 but eventually moved to Spain. He won the Ballon d'Or in 2018, the only player outside of Lionel Messi and Cristiano Ronaldo to do so since 2007.

Shearer: I can't believe you have him in ninth, that's a big call.

Richards: I wouldn't associate him with the 'sauce' or tricks and flairs. He's a technician, a passer. He had some good close control but I think there's better on the list.

Belgian midfielder Hazard joined Chelsea in 2012 and lifted two Premier League trophies, two Europa League trophies, one FA Cup and a League Cup during his time there. He was widely recognised as one of the greatest players in the Premier League thanks to his incredible pace, agility, creativity and technical ability. But, after joining Real Madrid in 2019, he has been plagued by injuries and made just 37 La Liga appearances.

Richards: Some of the stuff he used to do....there was that goal against Arsenal when he just ran the whole pitch and someone tried to barge him off the ball and just went spinning. When I played against him you'd think you'd got him and then he'd just go the other way - so sharp and strong. He is the epitome of a baller in my opinion.

Italian midfielder Zola was known for his ball control, vision and passing ability and, after joining Chelsea in 1996, helped them win the Uefa Cup Winners' Cup, League Cup and two FA Cups.

Richards: This is what we mean when we're talking about a baller - everything about him - free-kicks, corners, the way he strikes a ball.

Shearer: Unbelievable - what a footballer.

Gascoigne's enjoyed hugely successful periods at Newcastle and Tottenham but played for Middlesbrough then Everton once the Premier League came into fruition in 1992. He became known for his strength, balance and dribbling skills along with his iconic personality and performances for England on the international stage.

Shearer: He took risks, on and off the pitch. Raw, natural talent - he didn't have to work at it, he could do everything with a football.

Lineker: Except give it to you! The only time he'd give you the ball is when he knew you had no choice but to give it him straight back. He'd beat four men and then lose it to the fifth, but then he'd do something special that would win you the game.

Le Tissier played for Southampton from 1986-2002, making 368 appearances overall, and is often recognised as one of the best players of the 1990s Premier League era. He was the first midfielder to score 100 Premier League goals and his loyalty to the Saints prompted fans to nickname him 'Le God'.

Shearer: To me, a baller is also someone who scores outrageous goals from all sorts of angles. Unbelievable skill, flicking it onto your chest, banging goals in from 30 yards. Someone who does a bit of everything, great technique, run with the ball, left foot and right foot, can beat people and do tricks. Le Tissier could do all of those things. He didn't care a jot whether he lost the ball. It was all natural - flicks, tricks, chests, volleys, you name it he could do all of those things.

Ronaldo became known for his flicks, tricks and step overs during his first stint at Manchester United from 2003-09, scoring 84 goals in 196 Premier League appearances. After a nine-year spell at Real Madrid and three years at Juventus, he returned to United in 2021 and is widely praised for his technique, skill, goalscoring ability and adaptability.

Shearer: He did have too much sauce when he was at Manchester United the first time - too many flicks and tricks and he wouldn't cross it when he should've done. But you have to have Ronaldo at number one.