Why UFC 268 could deliver fight of the year

UFC 268 promises to be even bigger and better than last week's show in Abu Dhabi - and that's before you consider the potential fight of the year on the undercard.

The prelims at Madison Square Garden also feature a debut for a young Irishman determined to become the new Conor McGregor. 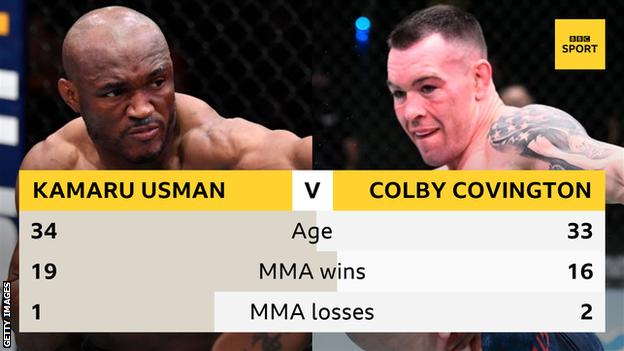 When Kamaru Usman made his first welterweight title defence against Colby Covington in 2019, many had the scorecards split when Usman managed to stop the American late in the last round.

Despite beating Jorge Masvidal next, the doubters still questioned whether the Nigerian Nightmare was a worthy champion with his ninth decision win in 11 fights.

But after agreeing to fight team-mate Gilbert Burns, Usman left Sanford MMA to train with Trevor Wittman and has since produced eye-catching knockouts against Burns and in his Masvidal rematch that have not just stretched his win streak to 18 but put him top of the UFC's pound-for-pound rankings.

"There was a point where Usman won fights in second gear," said Peet. "I was critical saying 'you look like a star, you've got a championship belt, now deliver'.

"And hooking up with Trevor Wittman has taken him to a new level. Since then he's been finishing fights and doing it in style. That's pushed him to the top of the tree and I think he'll make a statement on Saturday. I'm going to go Usman in the third round by TKO."

Since they last met, Covington beat Tyron Woodley to remain the top welterweight contender ahead of England's Leon Edwards, who faces Masvidal at UFC 269 next month, while Khamzat Chimaev is making waves after another dominant win last week.

Craig added: "We need to see a different version of Colby to the first fight. His bravado got ahead of him. If he mixes up his kicks and wrestling, just to throw Usman off his game plan, I think he can do this.

"This is no fairy-tale, he's no prince charming. He's not the nicest guy in the UFC. But belts changing hands makes the sport better and that's what I like to see, so I'm saying Colby and I reckon he can stop him in the third round."

'A knockout takes a bit of your soul'

After a brutal win over Joanna Jedrzejczyk in 2020, Zhang Weili was stunned 78 seconds into her second defence of the strawweight title as a head kick from Rose Namajunas saw the American regain the belt at UFC 261 in April.

Zhang has since started training with former two-weight champion Henry Cejudo in the USA and Craig feels China's first UFC champion should have had at least one fight before facing Namajunas again.

"At the end of that fight, Zhang didn't know what happened," said Craig. "The brain constantly resets and you can't comprehend it.

"I got to feel that in my hometown (Glasgow in 2017), which made it even worse. I remember walking back to my dressing room and asking if I'd won. It probably took a year to get my confidence back, and if it wasn't for sports psychologists, I wouldn't have been able to push through that barrier of getting knocked out.

"A knockout takes a bit of your soul and it's hard to come back from, but the fact she's gone over to Cejudo and his team, with her own coaching staff as well, there's a lot of people telling her what to do.

"Too many cooks spoil the broth and I think she might rush in, trying to rectify that loss. Rose will stay on the outside and pick her apart. I reckon it'll be a knockout again, probably in round two."

Namajunas is also trained by Trevor Wittman in Colorado and has recent experience of rematches having beaten Jedrzejczyk back-to-back before avenging her 2019 defeat by Jessica Andrade.

"I'm a huge Namajunas fanboy," said Peet. "Her footwork is sublime, her shot selection is unbelievable, so I think it'll be her again, but probably on points this time."

Gaethje-Chandler has fight of the year potential 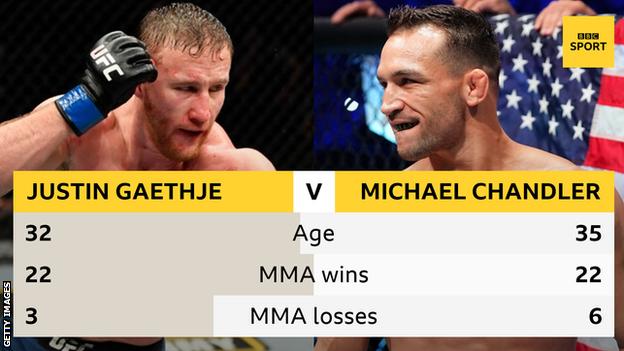 It'll be a busy night for Wittman as all three of his elite fighters are on the main card, with Justin Gaethje facing former Bellator champion Michael Chandler.

The big-hitting American pair are both looking to set out on the comeback trail after losing in the last two fights for the UFC lightweight title - Gaethje to the now-retired Khabib Nurmagomedov last October and Chandler to Charles Oliveira in May.

"It's going to be amazing," said Craig. "I see the two guys just swinging but I think Gaethje's got more tools in his arsenal.

"I see his wildness and the fact he can go all day, has heavy hands and a granite chin. I think Gaethje will come out on top, probably first round."

Peet added: "This isn't going past one round, it'll be a five-minute shootout. They've got a bit of lightning in the bottle at Trevor Wittman's gym but I'll say Chandler will land that crazy overhand right from nowhere.

"It's the first of three corners for Wittman, and that wouldn't bode well for Namajunas and Usman psychologically, so it could throw the cat among the pigeons."

And before all that, Ian Garry makes his UFC debut against Jordan Williams, and the 23-year-old wants to show why he calls himself 'The Future'.

"Usman and Colby is going to be insane, and there's a potential fight of the century in Chandler and Gaethje," he told BBC Sport.

"But I still want everyone to be talking about that tall blonde kid from Ireland. I always do, and the bigger the stage, the brighter I shine."