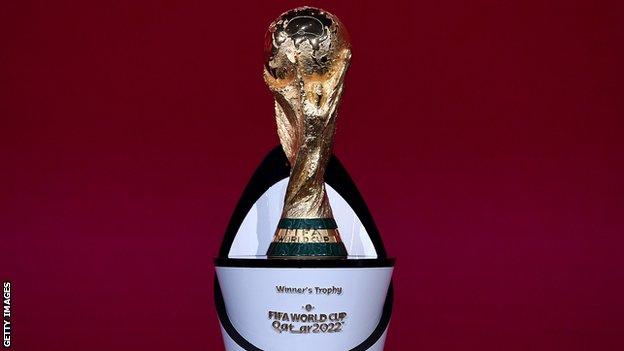 Africa's long journey to the 2022 World Cup will be decided when its five places in Qatar are determined over the next five days.

Ten nations are involved in two-legged play-offs, with the format providing some heavyweight pairings.

Less than seven weeks since going head-to-head in the Africa Cup of Nations final, Egypt and Senegal meet again - this time for a place in Qatar.

Sadio Mane pipped his Liverpool team-mate Mohamed Salah to the African title, and one of those star forwards will now miss out on a place at the global showpiece later this year.

The first legs of all five ties will be on 25 March, with the return legs four days later.

For the first time, the African World Cup play-offs will have Video Assistant Referee technology in use.

Both nations were present at the last World Cup but neither could make it past the group stages in Russia.

Senegal are aiming for a third appearance at the finals while Egypt are chasing a fourth outing at the global showpiece, and second in a row for the first time.

Aliou Cisse has kept the majority of the players that helped Senegal win the Nations Cup for the first time ever as the Teranga Lions aim to qualify for consecutive World Cups after a 16-year absence that ended in 2018.

Pharaohs coach Carlos Queiroz has said 'there is no room for sorrys or tomorrows' on his twitter account.

Two of West Africa's heavyweight nations will be going head to head for a place in Qatar, with the tie set to be remembered for quite some times given the rivalry.

Nigeria, who decided to keep Augustine Eguavoen after the Africa Cup of Nations, are hunting a fourth consecutive World Cup, while Ghana are looking to return after missing out on Russia 2018.

Ghana became just the third African side to reach the World Cup quarter-finals in 2010, losing to Uruguay on penalties, and are aiming to secure their fourth appearance at the tournament.

Both these countries have not qualified since Brazil 2014 and will be looking to bounce back after the Africa Cup of Nations for different reasons.

Cameroon, with a new coach in Rigobert Song, had to settle for a third-placed finish on home soil and are bidding to reach their eighth World Cup - the most by any African nation.

Algeria's defence of their 2019 Nations Cup title proved disastrous, with the Desert Foxes scoring just one goal as they finished winless and bottom of their group.

Coach Djamel Belmadi, who took charge in August 2018, had gone 35 matches unbeaten only to surprisingly lose that record against Equatorial Guinea.

Mali are the only side in the play-off round who are yet to play at the World Cup finals, and the Eagles enter their tie against Tunisia on the back of a last-16 exit at the Nations Cup.

The two sides met in the group stages in Cameroon, with the West Africans winning 1-0, but the match was overshadowed by Zambian referee Janny Sikazwe blowing the full-time whistle early after suffering heatstroke.

The North Africans are looking to make it to back-to-back World Cups, having been knocked out in the group stage in Russia four years ago.

After a group-stage exit at the 2018 World Cup, which included defeats against Iran and Portugal and a draw with Spain, Morocco are keen to return to the World Cup and build on their promising displays in Russia.

The North Africans are looking to secure their sixth appearance at the tournament, with their qualification in 2018 ending a 20-year absence from the biggest stage.

The Atlas Lions were knocked out of the Nations Cup in the last 16 by Egypt earlier this year, but their opponents for a spot in Qatar did not make it to Cameroon.

The Democratic Republic of the Congo have only played at the World Cup once before, with their sole outing coming as Zaire in 1974 when they lost all three group games.

The Leopards are the lowest-ranked side in the play-offs, sitting 66th in the world, and host the first leg in Kinshasa on Friday.