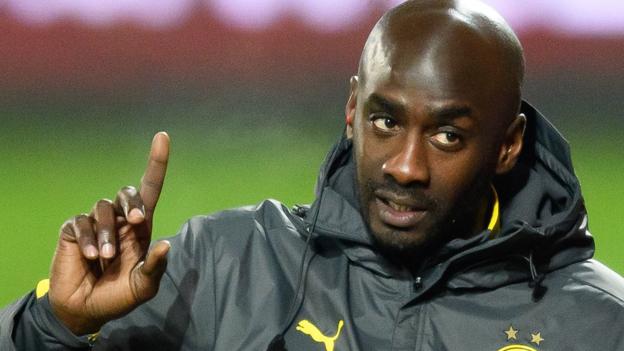 The first leg ended 0-0 on Friday in Kumasi, meaning a home win in Abuja would be enough to send the Super Eagles through to their seventh finals.

Addo is confident that Ghana, who crashed out of this year's Africa Cup of Nations, can still reach Qatar.

"The result doesn't change anything. When we go there we want to win."

"Even though our Africa Cup of Nations was not good this year, you saw we matched Nigeria in the first leg," said the former Black Star.

"So I don't see them as favourites, the pressure will be on them at home and away goals can hurt a lot."

The two West African rivals came into the crunch tie having both suffered early Nations Cup exits earlier this year, but in contrasting styles.

Ghana exited without a win and a humbling defeat to Comoros to exit bottom of their group, which also included Morocco and Gabon, in Cameroon.

Nigeria, meanwhile, won all three of their group games to become many people's favourites for the title only to be stunned by Tunisia in the Round of 16.

Addo, who was appointed interim coach after Milovan Rajevac was sacked after the Nations Cup, is confident his squad can more than match their Abuja hosts on Tuesday.

"They have high quality players but they've got respect for us and I thought the match in Kumasi was equal in terms of performance."

Addo also praised Ghana's young Ajax star Mohammed Kudus for his performance in the first leg but has called on him to be more positive going forward in the return fixture.

"He did well, and he's obviously a player Ghana missed during the Nations Cup [when he was injured]," said Addo, who played for Ghana

"I know the fans in Kumasi loved it when Kudus was doing his thing but sometimes he could be more precise and determined to go forward.

"He has the speed and if he is in front of an opponent I think he can create more, but he's an exceptional player, no doubt."

Nigeria-Ghana is one of five crunch ties on Tuesday that will determine which teams will represent the continent at the tournament in Qatar.

In the other ties, both Algeria and Tunisia will be confident of building on their 1-0 wins in Cameroon and Mali respectively.

Morocco will hope a home win can follow their 1-1 draw in DR Congo, while Egypt must travel to protect a narrow one-goal lead at the home of African champions Senegal.