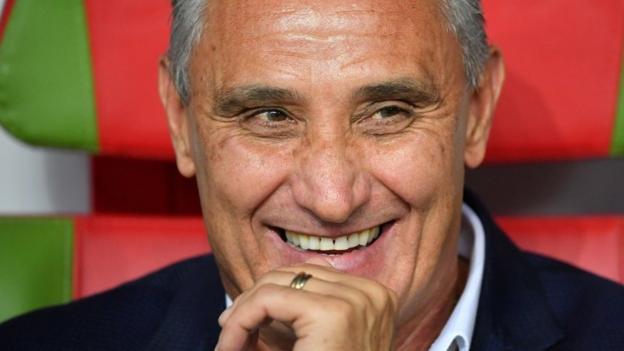 Brazil coach Tite has admitted that he knows little about World Cup opponents Cameroon, who have been drawn alongside the five-time champions, Serbia and Switzerland in Group G.

The clash between Brazil and Cameroon will be the last group game for both, so allowing both sides to learn a little more about each other in Qatar itself.

"I have no deep knowledge about Cameroon," Tite told BBC Sport Africa.

"I have a general idea, but I can't give you specific details as I was geared towards the World Cup qualifiers and in the direct preparation of the team."

Cameroon, who reached the Africa Cup of Nations semi-finals on home soil earlier this year, qualified for Qatar in dramatic fashion when scoring a goal four minutes into additional time of extra-time against Algeria on Tuesday.

The Algerians have since asked Fifa to replay the match, citing "scandalous" refereeing which "distorted the result".

The record eight-time African World Cup qualifiers have played Brazil six times, losing every match bar a 2003 Confederations Cup game they won 1-0 - a victory later overshadowed by the death of Marc-Vivien Foe at the same tournament.

Cameroon lost 4-1 to then hosts Brazil in the 2014 World Cup, which was the last time the Indomitable Lions contested global football's showpiece event.

Tite and Brazil last played the five-time African champions in a 2018 friendly in England where Everton striker Richarlison's solitary goal prove the difference between the two sides.

"Cameroon have players that feature for important clubs in Europe," said Brazil assistant coach Cleber Xavier. "The characteristics of African teams are to be intense and strong, with speed."

"It's a country that eliminated one of Africa's strongest teams, Algeria. Rigobert Song is a new coach, with I believe only two games under his belt. We are going to study Cameroon more."

Cameroon, the first African nation to reach the last eight of a World Cup in 1990, will be meeting for a third time in the global showpiece event.

At the 1994 World Cup, Brazil dispatched the Lions in the group stages with goals from Romario, Marcio Santos and Bebeto en route to a fourth world title.

In Qatar, Cameroon will meet Brazil on 2 December at the Lusail Stadium.